Remembrance Sunday is celebrated in the UK and the Commonwealth on the Sunday nearest to Armistice day. Armistice day is the anniversary of the end of hostilities in the First World War and the 2 minute silence which represents the 11th hour of the 11th day of the 11th month in 1918. This year’s Remembrance Sunday is on 13th November. Remembrance Day is held every year "to commemorate the contribution of British and Commonwealth military and civilian servicemen and women in the two World Wars and later conflicts". 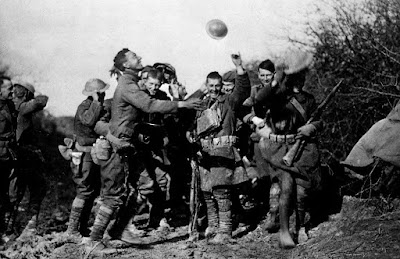 Every year ceremonies in cities, town and villages across the nation are attended by ex-servicemen and women, cadets, local armed forces and youth groups such as guides and scouts. Wreaths of poppies are laid on the memorials.

A national ceremony is held in London at the Cenotaph war memorial. There is a 2 minutes silence at 11am before the laying of the wreaths. The beginning and end of the silence is marked by gunfire on horse Guards Brigade, the Royal Marine buglers sounding Last Post, then the RAF buglers sounding Rouse.  The first Wreath is laid by the queen then the senior members of the Royal family place wreaths. Followed by the prime minister, political party leaders, Foreign Secretary; Commonwealth High Commissioners, and the Irish Ambassador and representatives from the Royal Navy, Army and Royal Air Force, the Merchant Navy and fishing fleets and lastly the civilian emergency services. 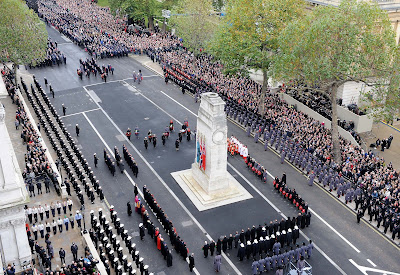 
In the weeks leading up to Remembrance Sunday poppies are sold to raise money for all past and current members of the British militarily. Poppies are used as a symbol of remembrance, the use of them was inspired by the poem 'In Flanders Fields'. In tribute to the poem Moina Michael vowed to wear a poppy to remember those that fought in the war. She wore a silk poppy to a YWCA secretaries meeting and gave one to 25 others, she then campaigned to make the poppy a national symbol of remembrance. In 1920 The National American Legion adopted it as their official symbol of remembrance and Anna E. Guérin was inspired to make the artificial poppies used today and then in 1921 sent her poppy sellers to London where they were adopted by the founder of the Royal British Legion. 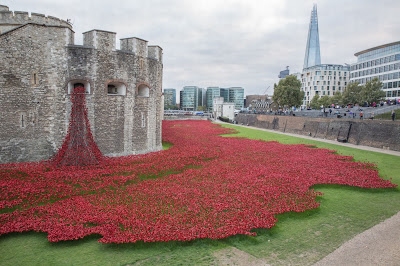