The SAG awards showcased some of the worlds leading actors on the 25th January in Hollywood with a glamorous red carpet event. The men of the event were showing off their tuxedos with pops of blues, metallics, bow tis, neckties and even a channel tie pin, we can confirm the mens at the SAG Awards kept it stylish!

Eddie Redmeyne who won the Best Actor Award wore a dapper black Prada tuxedo which he teamed with a velvet black bow tie and a beautiful rose gold timepiece by Choppard. The Theory of Everything star finished his stylish combo with a pair of polished black smart shoes. 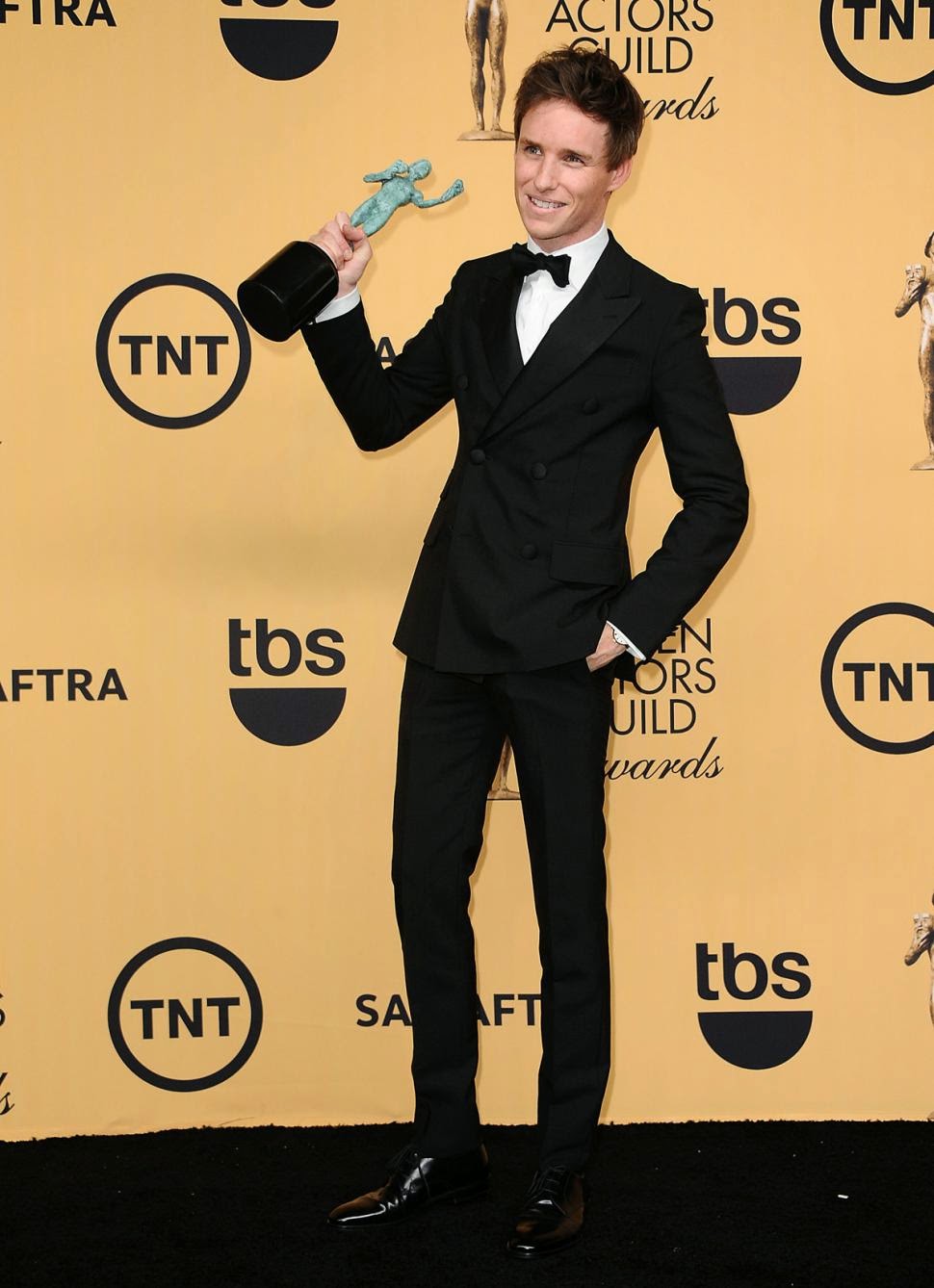 Jared Leto was seen wearing a double breasted satin lapel black blazer with a black open necked shirt, black slim leg trousers topped off with a bright pink poppy on his lapel. He wore velvet Louis Leeman loafers with crystal detailing on his feet with bright pink socks. Mr Leto left his hair free flowing past his shoulders in ombre with a full beard. 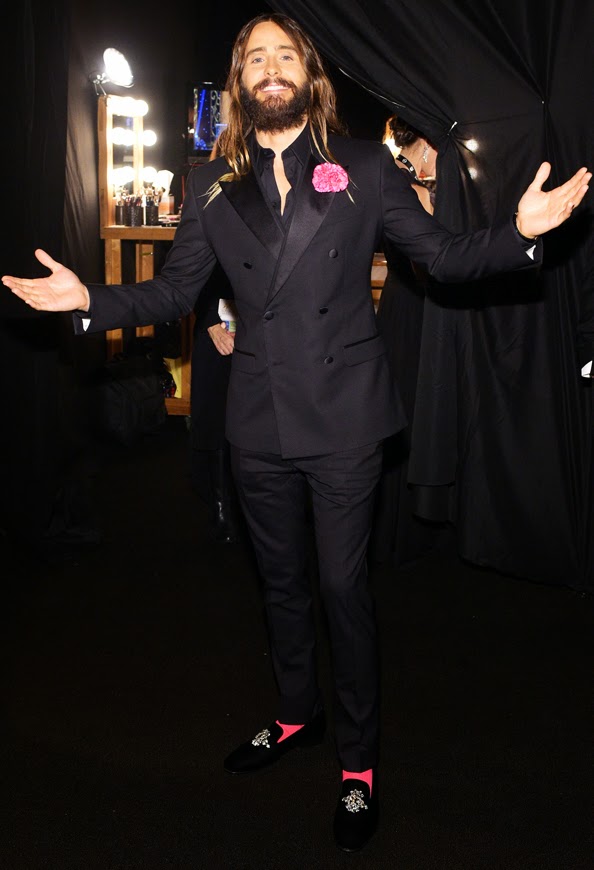 Nikolaj Coster-Walday from Game of Thrones wore a Salvatore Ferragamo tuxedo in navy blue with a smart waist coat, a crisp white shirt with black buttons and a black bow tie, he paired this ensemble with black Johnston and Murphy shoes, an IWC watch, Montblanc cufflinks and a plain white pocket square. 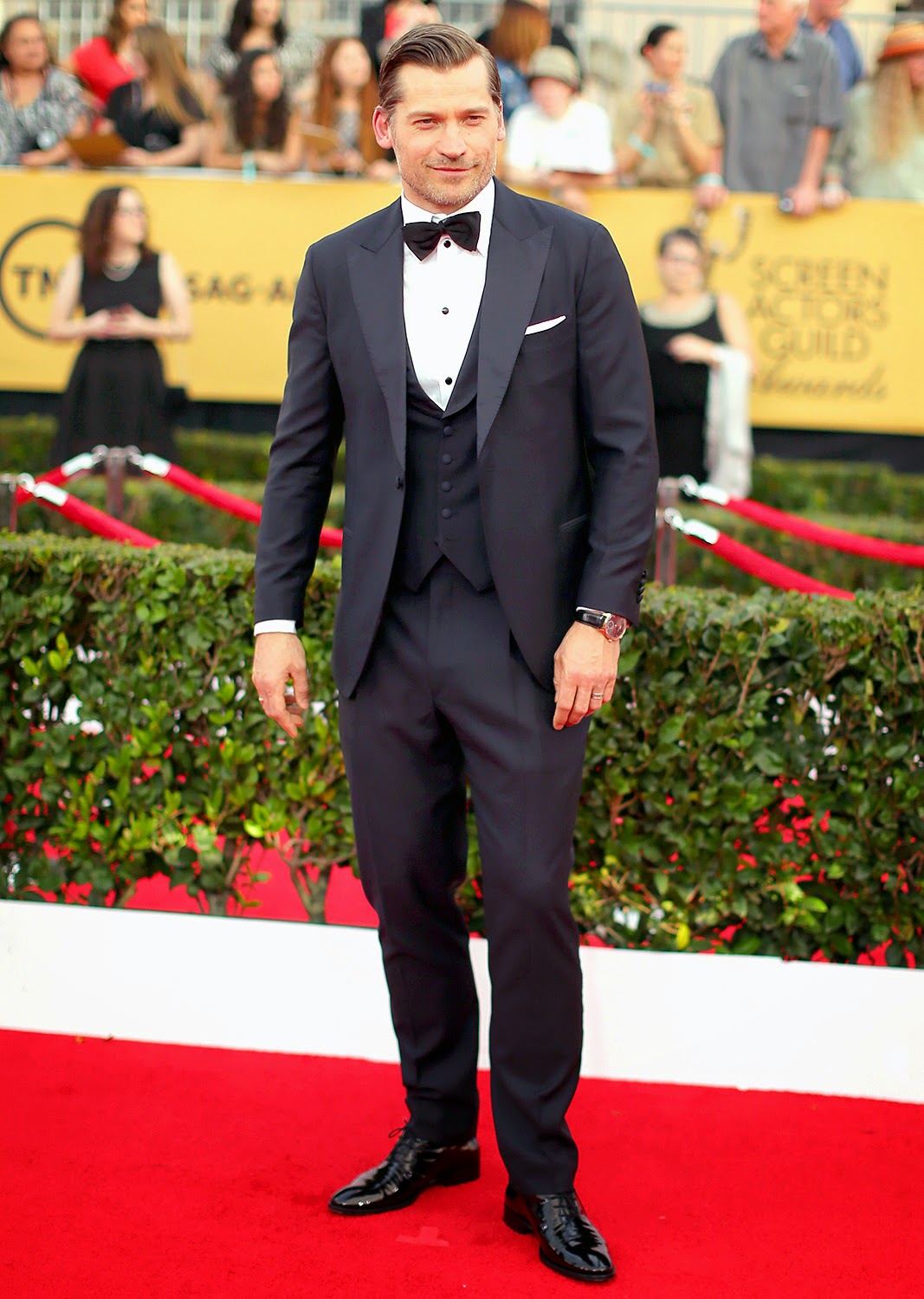 Matthew McConaughey surprised us with a colour contrasting metallic blue and black blazer worn with black suit pants, a crisp white shirt, black dickie bow tie and finished the look by adding a pair of black patient shoes. His wife complimented his outfit in a beautiful purple floor length gown. 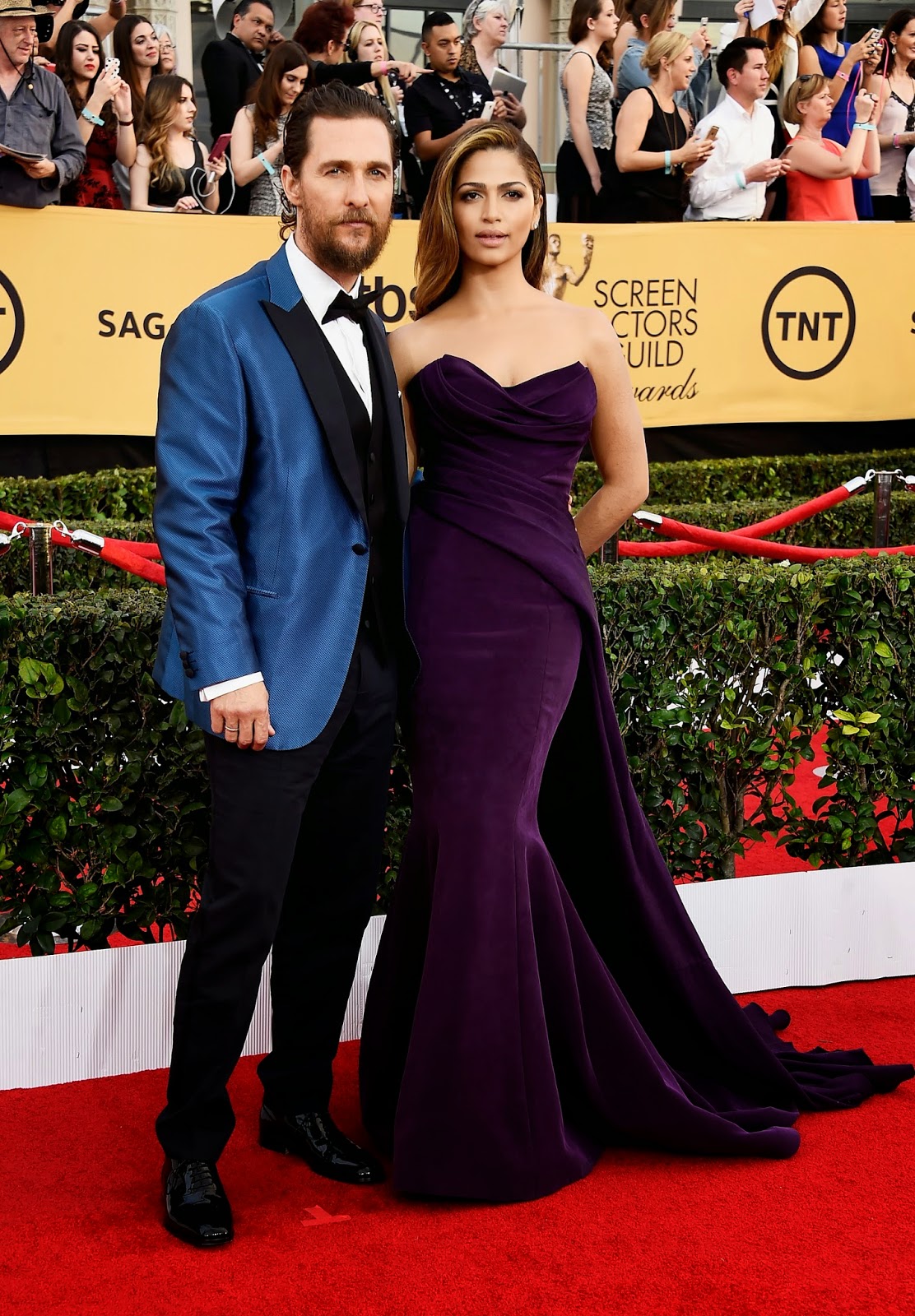 Justin Theroux looked rather dashing in a slim fitting suit paired with a skinny black tie and silver tie pin. Jennifer Aniston must be super happy to be engaged to this stylish hottie! 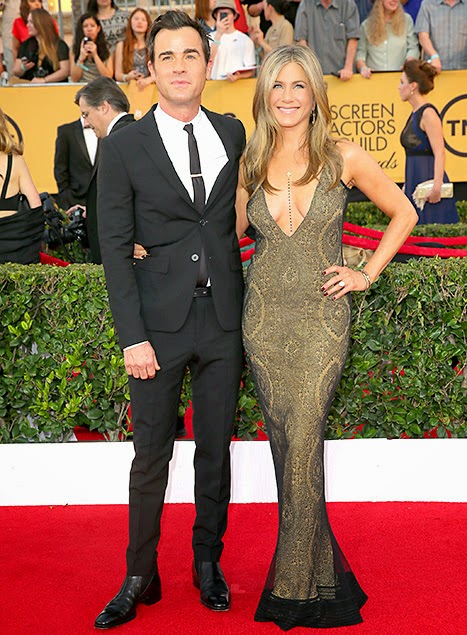 Burns night is celebrated on the 25th January, it’s a celebration of the life and poetry of the poet Robert Burns, the author of many Scottish poems. There has been a surge in Burns Night celebrations in the whole of the UK in recent years from people hosting parties and the surge in buying related goods.

People in Scotland tend to gather together to have a huge feast and eat haggis, a popular delicacy of the highlands. Many will wear traditional tartan attire in all their colours and glory from kilts, socks, jackets, Tartan Ties, bow ties, cummerbunds, scarves and pocket squares. There are so many versions of tartan available, most are assigned to an ancient name being handed down the generations.

Black Watch and Royal Stewart are the most popular tartan designs of today. Tartan is a pattern consisting of criss-crossed horizontal and vertical bands in multiple colours, tartan originated in woven wool but they are now made in many other materials making them more widely available. 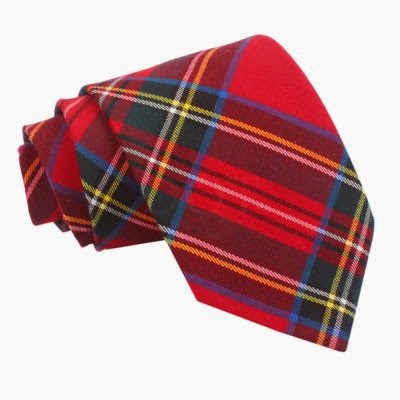 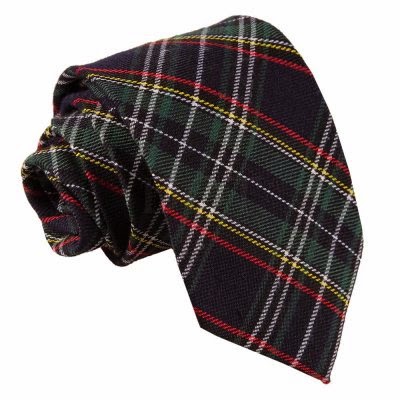 The stars were out in style on Wednesday night for the National Television Awards of 2015 hosted at the O2. Congratulations are in order for this years winners including The X Factor, BBC Eastenders, Downton Abbey, Gogglebox, Mrs Browns Boys, Danny Dyer and David Tennant to name a few. The red carpet was showcasing some amazing fashions and trends, we think you’ll agree they did the British public proud with their fashion styling.

Dermot O Leary hosted the event which was the NTA’s 20th anniversary and we think he looked dapper in his black pointed lapel suit wearing a crips white shirt underneath with a black dickie bow tie and white pocket square. 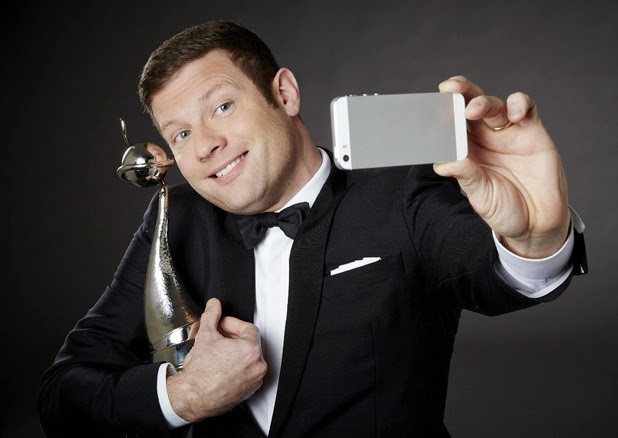 The winners for Best Entertainment Presenter Award went to Ant & Dec who attended the awards in matching 3 piece black suits with crisp white shirts and matching full length black ties, to finish their look they both opted for plain white pocket squares. This popular duo can always pull off a traditional suit and not look silly standing next to each other. 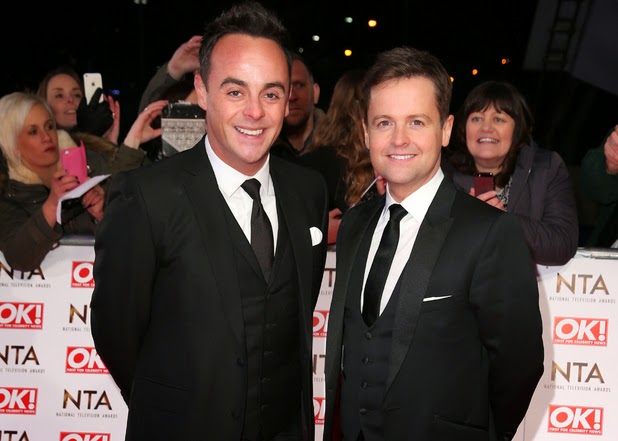 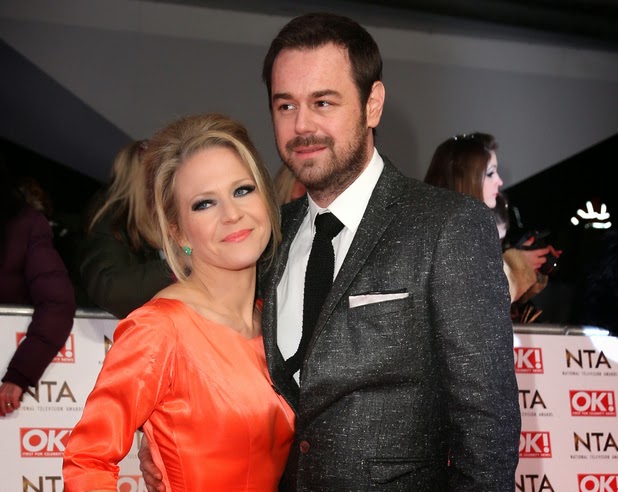 Mrs Browns Boys won the best comedy category, Brendon O Carroll collected the award and really stood out wearing a bright orange dickie bow tie with a matching pocket square, we think he chose orange to compliment his bright green glasses. His chosen ensemble really brought his plain black suit to life! We were actually shocked to see him dressed as a man…where was Mrs Brown?! 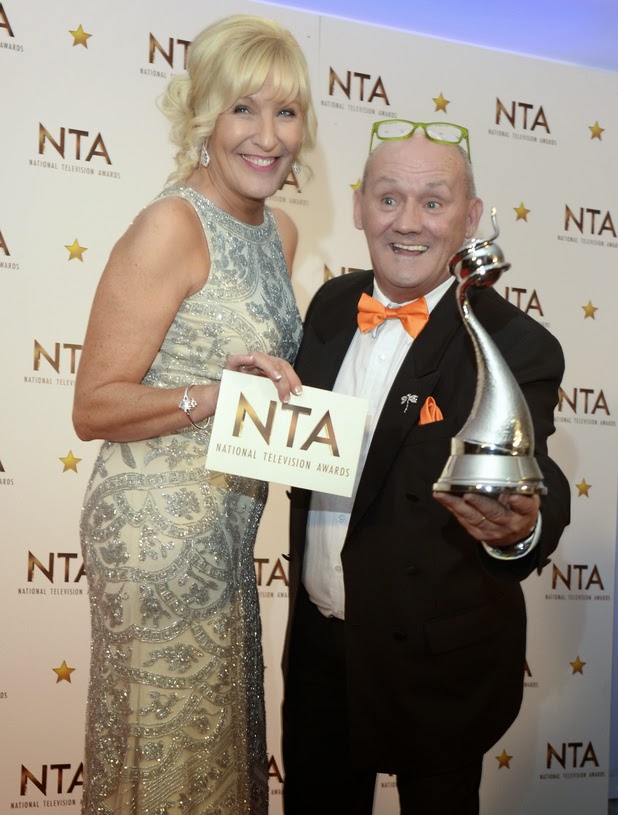 The Golden Globes, the first celebrity event of the year and we eagerly await the showcase of glitz and glamour as each celebrity parades and poses for photographs. The array of mens style was aptly classic, featuring the classic Black Bow Tie (BBT), Black Ties, Classic 3 Piece Suits, Lapelled Blazers and Pocket Squares. 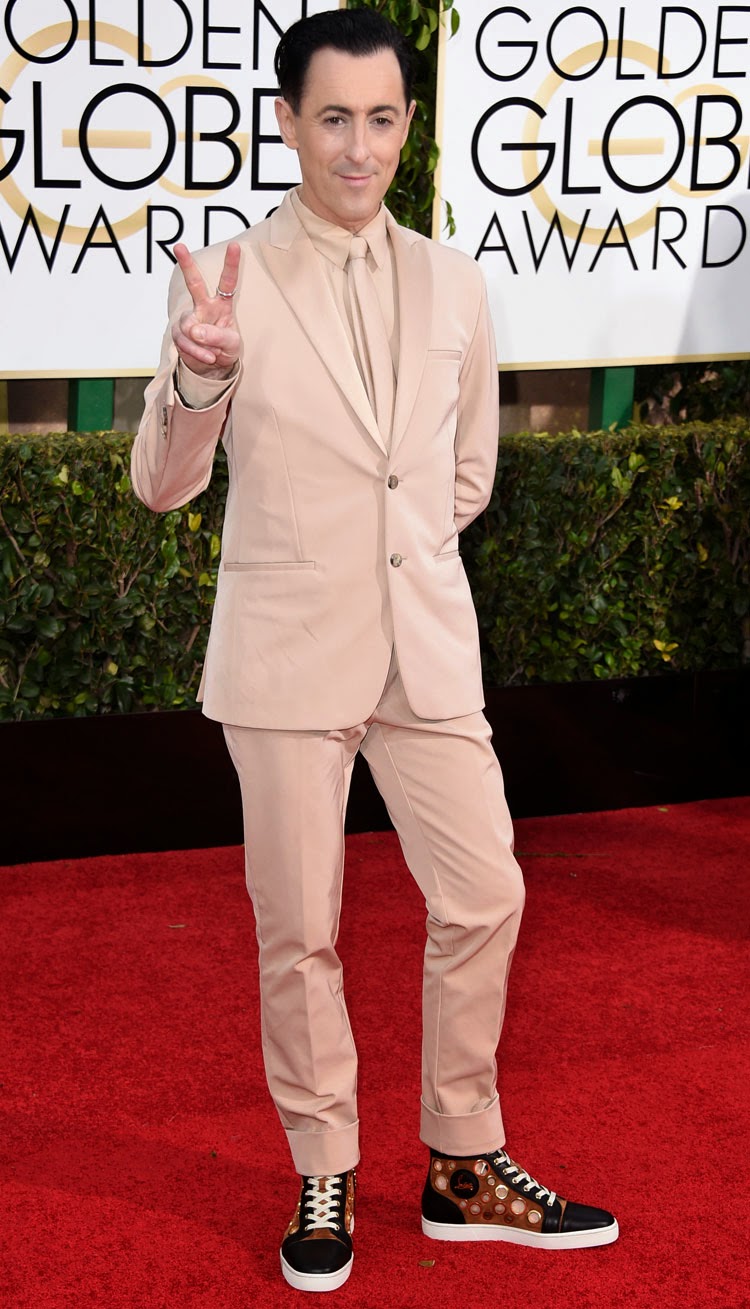 Matthew McConaughey sported a wonderful purple 3 piece suit with a satin black waistcoat by Dolce & Gabbana and a matching black bow tie. We salute you and your beard! An amazing actor with an equally amazing style! 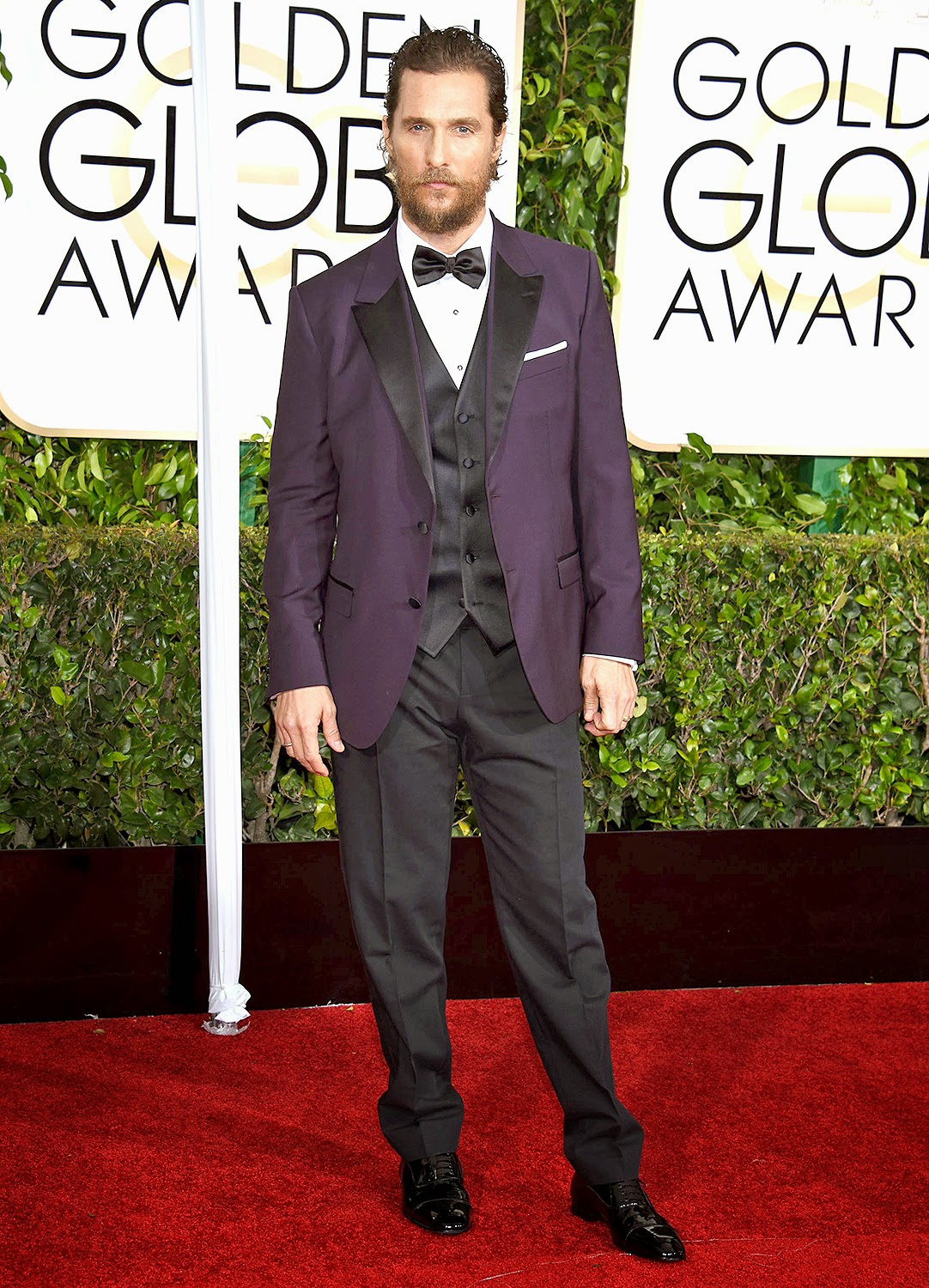 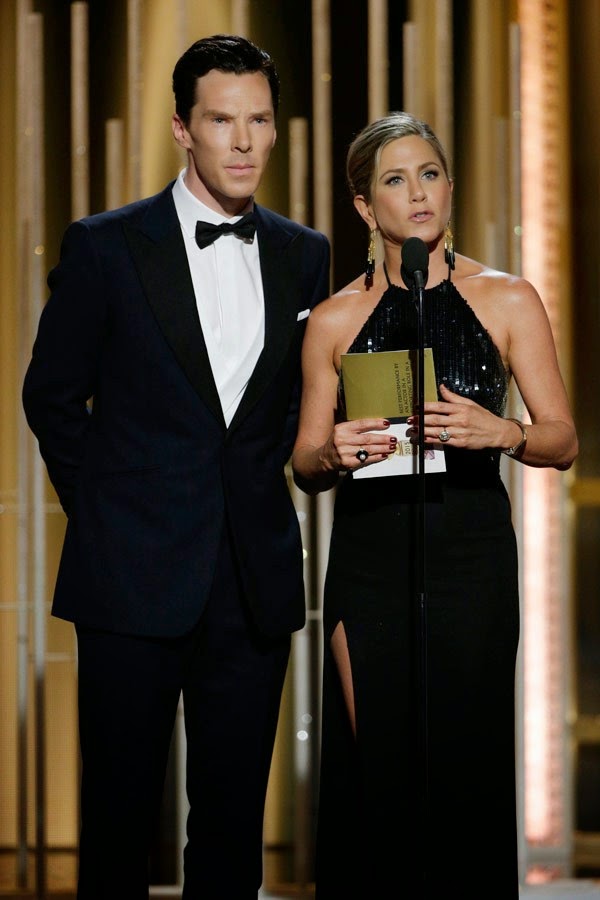 Eddie Redmayne is the next generation of actor, the young up and coming star shone on the red carpet wearing a beautiful velvet Gucci jacket with a plain BBT (Black Bow Tie), white pocket square and slim line trousers with a pair of super shiny black shoes. This British actor sure knows how to dress! 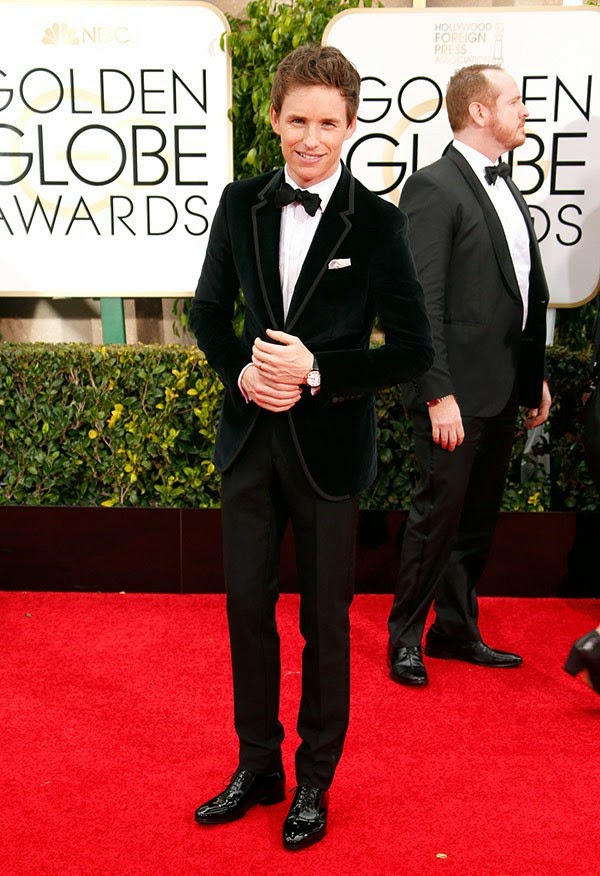 Photo/Video credit: Getty Images
Posted by Unknown at 11:00 No comments: