The 68th primetime Emmy awards took place this September at the Microsoft Theatre in Los Angeles. The awards celebrated the best of American primetime television. Crime anthology The People Vs O.J. Simpson: American Crime Story won 5 awards, the most awards of the night. Fantasy drama Game of Thrones won 3 awards, including Outstanding Drama Series. It surpassed Frasier to become the fictional television program with the most primetime Emmy Awards!

As the handsome actors and actresses arrived in sophisticated style at this years Emmy Awards we’ve selected our favourite choices from the event:

Reggie Watts, seen here wearing a bold blue tuxedo with a leather lapel, he finished off his outstanding look with a matching bow tie and pocket square in hot pink. 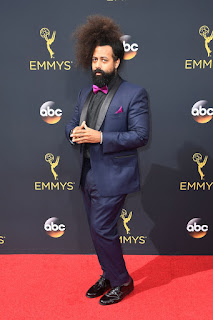 Terrance Howard stood out from the crowd wearing a trendy black and white check tuxedo and bow tie with matching cufflinks. He finished off his outfit with a gorgeous pair of black patient slipper loafers. 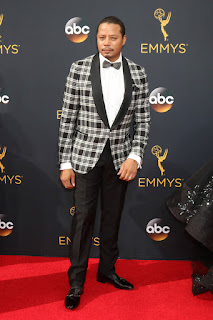 Trevor Jackson wore a non traditional burgundy coloured tuxedo for the awards designed by Anthony Franco, the tux was made using a luxurious velvet material. The singer teamed his unusual suit with a black velvet bow tie and a stunning crystal lapel pin. 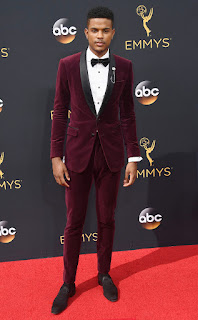 We can’t finish without mentioning the glamorous women’s outfits who attended the even and the looked absolutely stunning and elegant in their gowns: 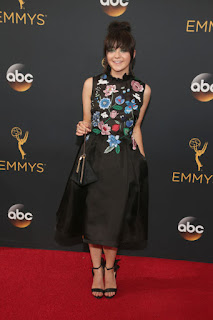 Kristen Bell looked like a princess as she stepped out onto the red carpet in a full length flower embroidered gown by Zuhair Murad, the dress featured a deep plunging neck line, billowing full skirt with a beautiful printed and embroidered floral pattern all over. 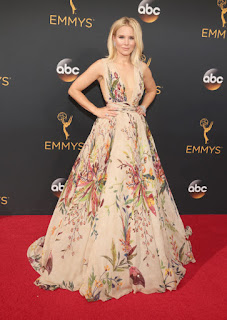 Emily Ratajkowski looked elegant as she walked the red carpet at the 2016 Emmy Awards, the 25 year old chose to wear a midnight blue Zac Posen gown for the annual awards ceremony. The actress turned model looked like an absolute goddess in the mermaid style gown, she teamed her dress with a beautiful pair of diamond drop earrings. 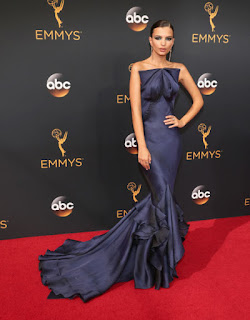